In recent years, internal IT has made huge strides in inventing new bureaucratic frameworks to govern itself. The daddy of them all is ITIL, which spawned IT Service Management (ITSM). But there’s also COBIT and ISO20000. Let’s not forget IT4IT, Prince2, and the Microsoft Operating Framework (MOF). In fact there are now so many frameworks for managing IT, that there is now a brand new framework, VerISM, by which IT managers can learn how to choose which frameworks they need.

It is laudable that such an important function as IT should make so much investment in its internal process management. Obviously, IT wants to do its job well, and to that end, it has burdened itself with huge and complex layers of internal bureaucracy. The problem is, almost none of the common frameworks take obvious account of whom we actually do it for. IT’s bureaucracy is almost universally inward-looking, often 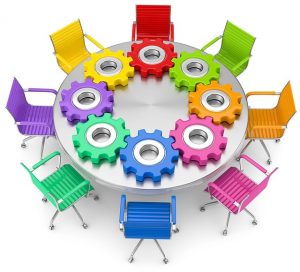 paying only lip service to considerations of its customer base. IT frameworks tend to govern internal process, exclusively. In doing so, these frameworks often pay very little attention to IT’s actual output. IT is so busy governing how it conducts itself, it seems to have forgotten why.

Before computers, comes the need for computers. It is users, not IT, that call IT into existence. Users come first chronologically, and should also come first in IT’s priorities. But they do not. When inventing systems of governance, IT has repeatedly, consistently, focused on itself and not on its end product. If IT does not increase the productivity and effectiveness of the organisation’s business staff, then it has no purpose. Service must come before bureaucracy. Commonly, it does not.

The technological demands of the individual business user are fundamentally simple: “provide equipment to make me productive, and someone to fix it when it goes wrong”.

The first of these, although perhaps technologically complex, is not difficult to meet in a world of emerging interoperability. However, that ‘technological complexity’ is often taken by IT to be its actual purpose – it is our job to be the masters of the esoteric arts of thinking like a machine in order to communicate with and command it, and of the LED-lit and air-conditioned world of network topology. IT necessarily hires specialists proficient in these areas. IT people tend to like IT, and what comes with it, systems, mechanism, predictability, control. IT is easy for IT people to get lost in IT. Take a look at the industry’s press publications – even those aimed the most senior IT minds are never far from describing a new technology rather than a new management technique.

This is why IT realised it had to invent bureaucracy to make sure it didn’t get too lost. IT knows what it is, and the risks of its inherent fascination with machinery. Trouble is, even IT’s bureaucracy betrays the IT mentality of ‘process’ rather than ‘product’.

The second demand – “someone to fix it when it goes wrong” – is fundamentally the focus of Mastering IT Support Delivery. It is needed because over recent years, IT has had an increasing difficulty with the the “fix it” part.Here’s how and why that is.

Someone to Fix It

Since the late 1980s, IT has had someone for users to call on. Initially, it was called the ‘Helpdesk’, born of a need created by the move to end-user (as opposed to mainframe-centric, “batch”) computing. The Helpdesk helped users with technical difficulties. Just after the turn of the century, this began to be replaced by a call-centre concept called the ‘Servicedesk’. This was a one-stop shop to deal with all incoming IT

enquiries, technical or not, immediate or not. It heralded a huge decline in service quality, as clerks and technicians were as likely as each other to pick up the call, and equally as likely to find themselves out of their skillset area. In the past few years, technology has tried to fix this by automating responses to certain types of enquiries, or expecting users to fix their own computer problems.

Even after the unreliability of the Servicedesk and reduction of human contact with IT that is becoming fashionable, there is the question of what happens beyond the call centre. Groups of technicians are assigned work, where the only effective prioritisation is that obvious system downtime takes precendence. All other requests can take days to fulfill. This is partly because those groups were initially constituted to maintain a technology, so they put that first – and incoming support requests may take a lower priority. It is partly because technician productivity has fallen by up to 35% over the past decade. It is partly because individual technicians are usually left free to organise and prioritise their own working day, and so fascination with machinery can influence their choices. The result is a plethora of queues, adding up to enormous backlogs in many IT departments.

“Fix it” presents IT with numerous difficulties and dilemmas. And all those governing frameworks have failed to resolve them.

A Return to Service

The focus of ‘Mastering IT Support Delivery‘ is on the service provided to the end user as assistance with computer deployment and use. Here is a standard for IT working that the business and HR managers can insist upon, because it instructs not just the professionalism of IT’s technicians ad their managers, but the way to support the corporation’s computer users. But that is only part of the story.

MISD also shows how decisions to offer this or that style of of service should be managerially informed, drawn from science and numerics. As history shows, the case for imposing Servicedesks everywhere was based more on the late 1990s fashion for call-centres, linked with driving down costs, than it was on any statistically gleaned decision. MISD makes heavy use of the statistically informed management decision.

MISD also shows those multi-function technical workgroups how to organise their resources. In particular, it shows how to make sure there are always resources for treating incoming support enquiries with alacrity and efficiency, without a negative impact on those workgroups’ other, existential duties.

There has to be bureaucracy, at least in some form, for the purposes of internal governance. But it must serve, rather than hinder or mask the real purpose of any IT function. Fundamentally that function is to increase, or in support terms at least restore user productivity. Users come first. Service before bureaucracy. Always.

By continuing to use the site, you agree to the use of cookies. more information